Hope is a funny thing.  Like a small beach ball hidden in our belly, hope continually pushes us up and out into the world each day, buoying us with an abiding belief that things will get better.

But when things don’t get better, when every day seems to be worse than the one before, or when life punches you in the gut so hard it sucks the hope right out of you, it can be hard to get out of bed.  You can look at the world and your role in it and just think to yourself, “It all doesn’t matter.”  This is a dangerous place to be, and the most dangerous places often have the least amount of hope.

Our work here is designed to spark hope in every person who walks through our doors, and you can find one of our best sources of hope in the café in the life and love of Mrs. Falls.

Mrs. Falls makes dinner for 70 kids each day and sends them home with a snack each night as effortlessly as if they were her own kids at home.  When we were in the midst of major capital improvements to the center to get it open in time, she was bringing in dish towels and oven mitts from home to make the kitchen her own.  She listens with a knowing look and a deep twinkle in her eyes.  With 12 grandchildren and 13 great grandchildren of her own, you get the sense that there’s not much you can tell Mrs. Falls that she doesn’t know already.  But she makes you feel like you’re the only one in the world when you talk to her.  When you make her laugh, you may think you’ve heard the sound of a bird in the Amazon Rain Forest—but that’s just the way she laughs.

Mario, her 11-year-old sous chef at the center, says, “It would be boring here without Mrs. Falls.  She’s funny and nice.”

The thing is, Mrs. Falls has fought her own battles against hopelessness.  She was 77-years-old when we opened last October.  She had not worked in ten years, and she was not interested in working with us.  Three years earlier, cancer stole the life of her 46-year-old daughter, Karen, and the pain of her loss hung heavily.   But Mrs. Falls’ husband, Frank, and daughter, Keely, encouraged her to give it a try here.  She did, and in less than six months, Mrs. Falls has gone from fighting for hope to spreading it wildly.  She has quickly become much like a mom or a grandma to us all, and stands as a reminder that none of us, not one of us, has finished fulfilling our purpose yet. 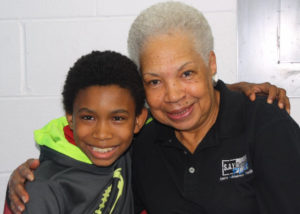