As a special treat, we will be hosting a guest speaker series via Zoom for all who wish to participate while our remote programming is in place.
Tonight’s guest: 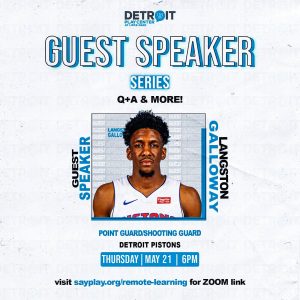 Family: He and his wife, Sabrina, have a son
Education: Graduated from St. Joseph’s in December 2013 with bachelor’s degree in sports marketing
Causes he supports: Men’s health, and particularly prostate cancer.
Has a passion for mentoring and holds a summer camp back in his hometown of Baton Rouge, LA. During the 2017-18 NBA’s ‘Season of Giving’ Campaign, took children who participates in PeacePlayers on a Nike shopping spree.
Player stats and recognition: