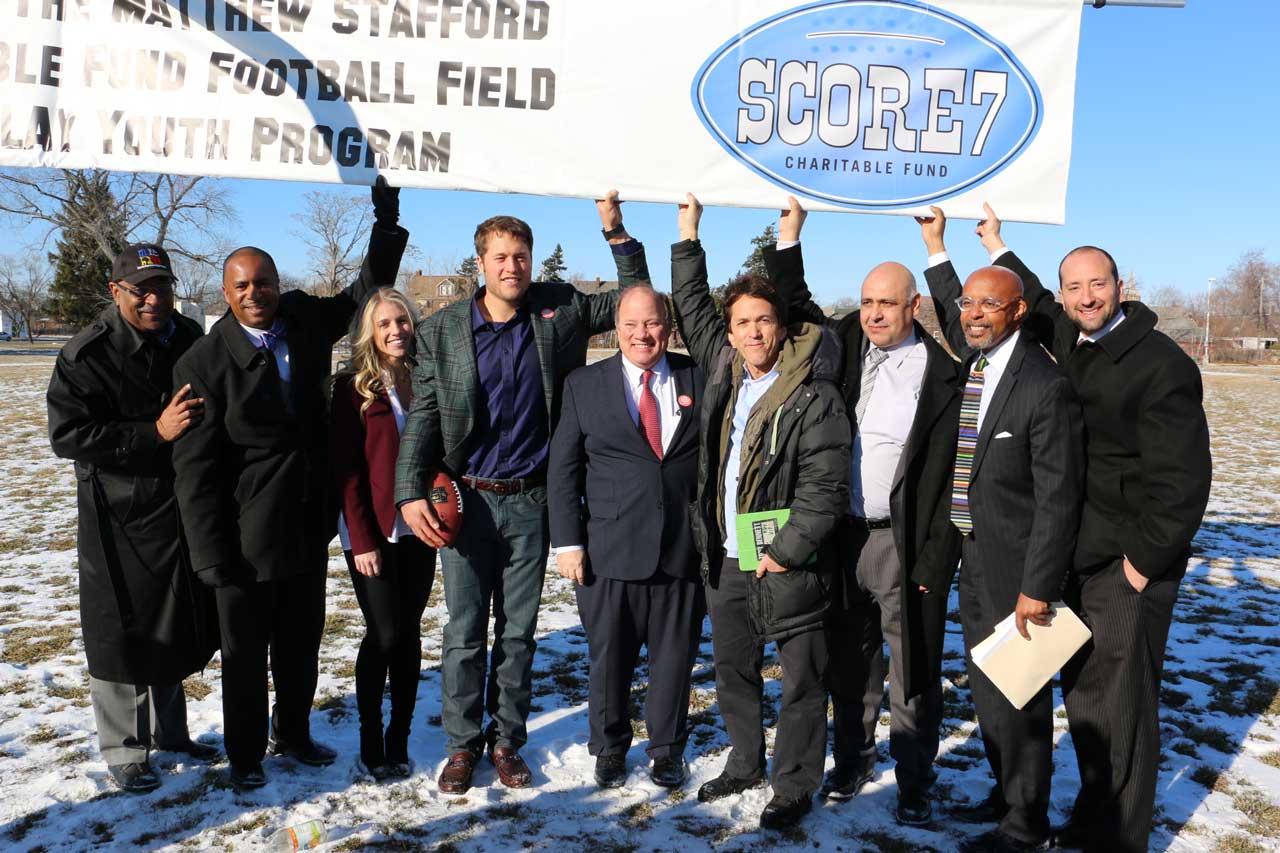 Located on 14.2 acres in the Osborn School area, the new SAY Detroit Play Center at Lipke Park will take a unique approach to Motivational Learning, offering top flight athletic facilities and access to professional athletes such as Matthew Stafford – but only if participants (students aged 8 to 18) maintain a certain grade point average and school attendance or enroll in the daily tutoring program on site, as SAY Detroit will build a 7,000 sq. ft. digital learning center for that purpose.

“We know a huge problem in Detroit is that kids have too few places to play or study after school,” said SAY Detroit Founder Mitch Albom, who initiated the concept. “This is a reason they fall behind in academics and sometimes get in trouble. We also know that for both boys and girls, there are few motivational tools better than a good gym, workout rooms and playing fields – plus the chance to meet big time athletes.”

The goal of the SAY Detroit Play Center is to increase academic performance, attendance and graduation rates, and to heighten social, self-esteem and professional presentation skills, all within the confines of a safe and well-operated facility. An added benefit is taking a vacant eyesore to the community and giving it a new life and purpose.

The overall investment in the 10-year revitalization plan is estimated at $10 million, including a Capital Investment of $2.5 million. This includes an investment of $675,000 by the City of Detroit ($425,000 being a DNR Grant), and seven-figure commitment from the Score7 Foundation. The plan will be presented soon to the Detroit City Council.

Stafford, now in his sixth year as Lions starting quarterback, saw the project as a good fit for his charitable efforts. “This is a tremendous opportunity to impact our city’s young people, and make a change for the better in their educational experience, best preparing them for college, jobs and whatever else lies ahead in their future.”

Mayor Mike Duggan praised Albom, Stafford and the other partners for stepping up to provide this new and improved educational and recreational opportunity for Detroit Youths. He also cited their cooperation with and support of neighborhood groups surrounding Lipke Park.

“While the city did a great job of providing recreational opportunities at 300 city parks last summer, it still lacked the resources to address vacant facilities as large as Lipke,” Mayor Duggan said. “Thanks to this partnership’s new approach, which has the support of the surrounding community, young people in Detroit will have a place to learn and play that is beyond anything our city has had before.”

“The Lipke Rec Center had been an anchor in the Van Dyke and Outer Drive community for decades and has served three generations of youth.  Having it sit vacant over the last year and half has been very hard on the surrounding neighborhoods,” said Councilman Scott Benson (Dist. 3). “Having worked with the Mayor and 3rd District constituents on reopening Lipke Park, I am excited to see this facility being brought back to life as an athletic and educational campus for our Detroit youth.”

How the athletic & education programs will work

The SAY Detroit Play Center, which will eventually serve all of Detroit, initially will work with nearby schools to monitor the progress of students and ensure they are meeting the entrance standards, as well as identify the areas in which they need work.  Those below the grade point and attendance standards will be eligible for on-site tutoring and mentoring. If they put in the hours in the Academic Center, the athletic programs will be available to them. There will also be programming for dance and music, including plans for a recording studio funded by Notes For Notes, a national educational music organization.

SAY Detroit will immediately begin repairs and refurbishing of the facility. The City of Detroit will lease the property to SAY Detroit on an affordable, long-term basis, and construction on the football, baseball, and soccer/lacrosse fields will begin in the Spring, with the goal of a soft opening in Summer, and full operation by September.

Karen Washington, Chairperson of the Board of We Care about Van Dyke/7 Mile, a neighborhood organization, is a 30-year resident, and lives across the street from the Rec Center, says, “This is a quality of life issue for us. It gives our kids a safe and healthy place to play in our neighborhood.”

The planning horizon includes an initial three-month reconstruction period through April, to rebuild and refit the current facility (including replacement of stolen HVAC rooftop units), followed by the completion of the outdoor football/baseball/soccer fields by early summer, followed by a “soft opening” by Fall 2015.

Several of the outdoor athletic fields, when not in use for programmed activities, will be available for use to the general public.

SAY Detroit, formed in February 2006, is a fully formed 501(c) (3) charity aimed at improving the lives of the neediest citizens, through shelter, food, medical care, volunteer efforts and education. It serves as the umbrella for ongoing major projects including A Time to Help, S.A.Y. Detroit Family Health Clinic, and Working Homes/Working Families, and funds dozens of projects for Detroit-area agencies.    To learn more about SAY Detroit, visit saydetroit.org.

Score7 Charitable Fund is a 501 (c) (3) Charitable Foundation, established for the purpose of providing opportunities through educational enrichment, mentoring, leadership initiatives, and sports activities for school-aged boys and girls of all backgrounds throughout the country.

About Notes for Notes

Notes for Notes® is very excited to announce the development of their newest studio in Detroit in partnership with the SAY Detroit Play Center at Lipke Park. Notes for Notes® is a non-profit organization which builds, equips, and staffs after-school recording studios packed with guitars, drums, keys/synths, DJ gear, digital music stations and full recording studios offering youth completely FREE access to explore, create, and record music. The organization currently has six of its after-school studios in communities around the country with another six on the way in 2015. The new Detroit studio is supported by an incredibly generous community of local and national companies, artists, and foundations who believe in supporting the youth of this amazing city.