Our 14U boys’ basketball team capped off their season-winning Detroit PAL Summer League playoff championship appearance with a runner up finish on Sunday, but we also scored big this August with two special events hosted at the SAY Play Center.

On August 10, Coach Dan Boylan and his brother, Joe Boylan, hosted a free basketball clinic. The latter Boylan is an Assistant Coach with the NBA’s New Orleans Pelicans, and gave up some vacation time to visit Detroit and work with 30 of SAY Play’s Warriors on the 12U, 14U, and 17U teams. The 17U players even coached the 12U team in the final scrimmage. Attendees were also treated to an inspirational talk from Coach Boylan’s former high school basketball coach Mike Massucci, author & winner of over 200 Michigan High School basketball games 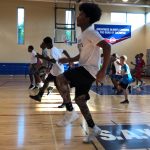 Just two days later, SAY Play lent its Detroit Pistons-refurbished basketball court to the Third Annual John and Elizabeth Head Memorial 3 on 3 Tournament. The tournament was founded by Joe Boylan to honor the lives of siblings John and Elizabeth (Lisa) Head, fellow Shrine Catholic High School graduates. John, who went on to play basketball professionally in Peru, played on the same school team with Joe and was honored by other former teammates who also participated.